Fruit Of Islam in action.  Learn for yourself!
Some of this is ugly, but all of it is true!

If you agree with this website, please help advertise it (without committing spamming of course)

British National Archives show a son was born to Obama Sr. in 1961 in Kenya
http://www.dcclothesline.com/2013/06/20/british-national-archives-show-a-son-was-born-to-obama-sr-in-1961-in-kenya/

This site has a lot of well documented history of Barry's life.
http://politicalvelcraft.org/2013/03/28/the-tragic-family-background-of-barack-obama-aka-barry-soetoro/

http://conservativepapers.com/news/2012/04/04/a-case-for-impeaching-obama/
110 Articles of Impeachment against Obama

http://www.siotw.org
A very good site about Islam (almost as good as this one!)

You can learn about muslims too, from their Quran
http://www.thereligionofpeace.com/Quran/023-violence.htm

Oh yes, the Boston Marathon bombers most certainly are/were ISLAMICs!!  With ties to the same crew that killed all those Russian school kids.  (see below)

NBC: BOSTON TERROR SUSPECTS HAVE INTERNATIONAL TIES AND HAVE BEEN IN U.S. LEGALLY FOR ABOUT 1 YEAR
http://www.theblaze.com/stories/2013/04/19/nbc-boston-marathon-bombing-suspects-have-international-ties-and-have-been-in-u-s-legally-for-about-1-year/

Read about Islamberg here in the USA

The Cost of Islamic Incest
http://clashdaily.com/2013/05/the-cost-of-islamic-incest/ 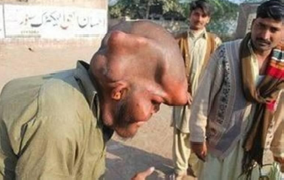 The big news now is voter fraud in the 2012 presidential election.

The evidence is overwhelming!

http://www.renewamerica.com/columns/zieve/121127 This one is very good

The Russians at Beslan were not expecting Muslims to kill their children. See the religion of peace in action!

This site has graphic truth about islam http://barenakedislam.wordpress.com

All who voted for Hussein Obama are traitors and any conservatives who voted third party instead of Republican are stupid and disgusting.

Can you identify the muslim on the right? Here's a clue, he is the most dangerous muslim in the world. 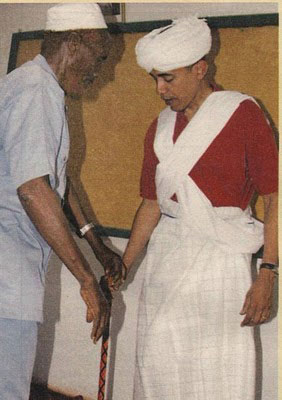 If you think this photo is a fake, click here for proof that it is real.

"The future must not belong to those who slander the prophet of Islam..." - Barack Hussein Obama addressing the United Nations 2012

Regarding Barry Soetoro (AKA B. Hussein Obama):  How could  we have really forgotten 911 so quickly?
America failed a very important IQ test and elected a Kenyan born, Islamic oriented, communist with terrorist anti-american connections as President of the United States.
It is a very sad situation for the United States and a direct result of moral decay and the rejection of God. 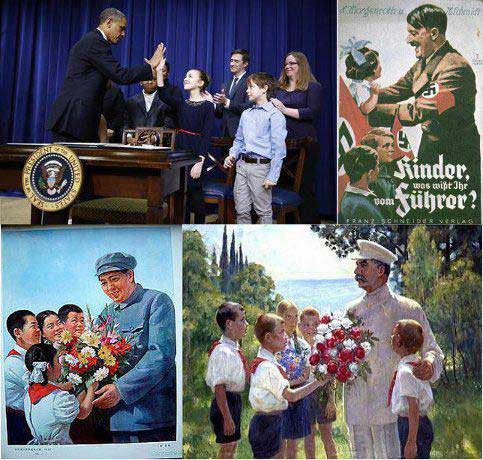 Individually these links would be very concerning.  Collectively they are ALARMING!

Quote from the blog below "As an IRS tax examiner,one of many former federal jobs, I have seen what it appears Barry Soetoro has done, mostly by illegal aliens attempting to acquire a new identity in the U.S and/or criminals looking to acquire a new ID."
http://giveusliberty1776.blogspot.com/2012/09/now-we-have-complete-fraud-sitting-in.html

If Barack Obama has an immediate eligibility problem, it is more likely to derive from the Social Security Number he has been using for the last 35 years than from his birth certificate.
http://www.wnd.com/2012/07/obamas-social-security-number-challenged

Proof that Barack Hussein Obama was born in Kenya and is disqualified from being POTUS
http://www.breitbart.com/Big-Government/2012/05/17/The-Vetting-Barack-Obama-Literary-Agent-1991-Born-in-Kenya-Raised-Indonesia-Hawaii

At least now we no longer must concern ourselves that President Barry Soetoro (AKA B. Hussein Obama) will, in front of news cameras, deeply bow down to Osama bin Laden as he has done to other islamic kings.

Do you have questions about Barak H Obama? Watch this short video http://www.youtube.com/watch?v=ZGmZ0fhH5fM

Obama is NOT qualified legally to be POTUS http://www.obamacrimes.com

If you have ANY DOUBTS that Obama is Muslim http://www.youtube.com/watch?v=XE9mZCRX2mg

You don't believe that Obama is really Muslim?  Click Here!

You don't believe that Obama has terrorist links?  Click here!

Do you personally have what it takes to be a devout muslim?  How's that throwing arm?

(Terrorism is not an enemy, it is a tactic. The real enemy is Islam.)

Did you know that the Barbary pirates were Islams?  Click here for some history.

Be aware that the terrorists who murdered 323 people INCLUDING 156 CHILDREN in  Beslan, Russia were ISLAMIC Terrorists, many of them were Arabs in heat.. This is the religion of Islam in action.  Are the "passive" supporters of this "religion of peace" really so innocent as they quietly and passively endorse such things?

The secrets of Islam are not such big secrets if you read the news and study history even casually.  Before you put those rags on your head or put a tent on your wife because some guy was nice to you and appeared "wise and holy", be fully aware of what you are joining up with.  You can say: Quran, Fatawa, noble hadith, hadith, Jalalain, Katheer, Tabari, Qurtubi, Saadi, Al-Bahr-l-Muheet, Irab-l-Quran, Sarf, Balagak, Hadith, Lolo-w-Mirjan, Hadith Qudsi Arabic, Hadith Qudsi , Sunna, Fiqh, Fatawa Nawawi, Igatha-t-lahfan, Ihya' Uloom-Eddine, Masa'il-Ibn-Taymiya, Tarikh-t-Tashri-l-Islami and bow and all kinds of "spiritual" stuff, but be AWARE of what exactly you are supporting when you endorse Islam.

To be fair and balanced here is a link to http://www.thereligionofpeace.com 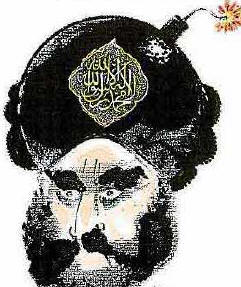 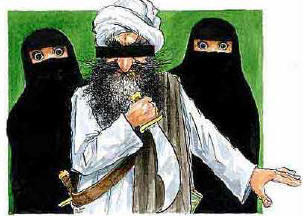 Related links: (none of these links should imply endorsement of content)

Since it is now common knowledge of how Islamics behead and slaughter innocent civilians in their practice of  Islam in obedience to their Koran, and there have been many videos of other beheadings since this one  I see no need to continue showing the Berg video from this site and have removed the actual video from this site.. 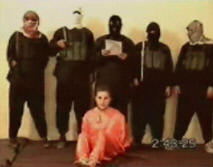 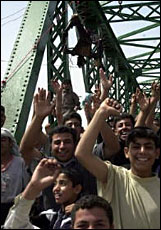 http://www.newsherald.com/viewpoint/phillucas/040404.shtml
This shows fruits of Islam rejoicing over burnt American body hanging in background from bridge.  The link is to a News Herald Editorial

We found some fascinating examples of Islamic child rearing 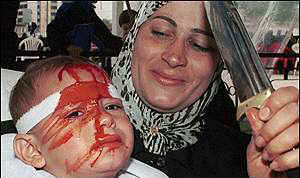 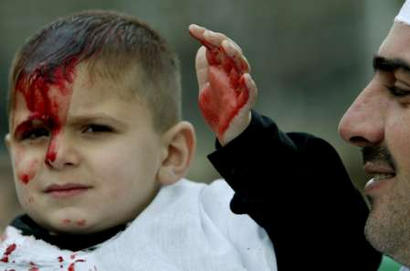 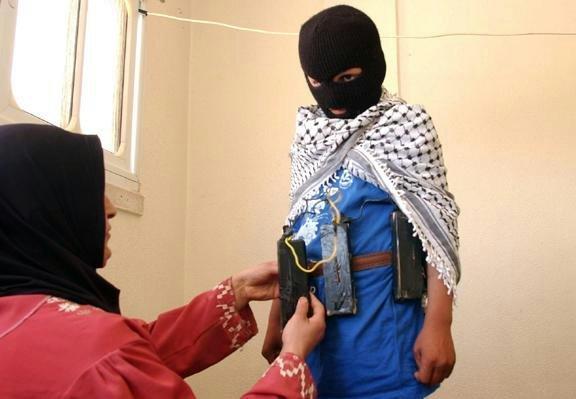 Here are some more Islamic child rearing, elevating women and other photos at http://www.faithfreedom.org/Gallery/6.htm

The PIJ and the other Palestinian Islamic fundamentalists bring terrorism to kindergarten.  Mohammed would just be thrilled with these modern terrorists with their jihad du jour.  Alas, there was no need for a guard at Mohammed's tomb, eh?  Palestinian Islamic Jihad being instilled in Islamic "baby boomers".

Here is a fantastic study on the violence of Islam www.prophetofdoom.net

Here are some great quotes from that bubbly fun loving Muhammad himself in his own words www.prophetofdoom.net/quotes1.html

Click here to determine your ability to relate to Islam personally.

Notice that some of these links have strong information and some, while historically correct regarding Islam, also have false-christian doctrine.

Note that the Anti-American scum running google refuse our advertising of this site.
Click here for rejection email.  You can email them at adwords-support@google.com

WARNING These videos are real and graphic from From al-Arabiya.
We recommend these videos for the anti-war protesters so they can be aware of exactly what they are defending and supporting.

A video of Saddam's practices towards prisoners

We would not wish to disrespect the US educated Islam so here is a link to a graduation article.

Beware nutty Arabs in heat!
Yes, amazing as it seems, this war that resulted in the 9/11 attack on America was started by a small handful of nutty Arabs in heat. Apparently even the majority of their associates on the airplanes may not have been aware that they were on a suicide mission.

Now the concerns grow regarding the religion of the children of Ishmael, Islam. How can it be a religion of "peace" and have so many commandments regarding war? Let me point out that they do not have a "New Testament" to replace the older violent plans as does Christianity.

So, how can this be that we have a Koran book teaching violence and a vast majority of its adherents being peaceful?

Well, it is kind of the same principle in mainstream Christianity.  People are not really following their religious book. They say it is "God's Word", but DON'T BOTHER TO READ IT! If  you claim to believe it is God's Word, then READ IT FOR YOURSELF!

Much of Islam is really just a social group, just as mainstream  Christianity is really just a social group. Neither one of them are following their book at all except for a handful of out of context precepts they are comfortable with. Trinitarians reject Jesus Name Baptism and monotheism holding to a man made Roman dogma that has nothing to do with the Bible. While many trinitarians draw the line regarding slobbering over ceramics, they still worship the same trinity of god persons that Rome invented for them. So called Christian groups ordain Sodomites, and Arabs in heat, ie Islamic terrorists, go to sex bars before hijacking airplanes for their Islamic jihad.

People are just not reading their manuals!!!

In Christianity the only ones really following the Bible are the Apostolic Pentecostals and in Islam the only ones
really following their book are the nutters. Islam is a  fake religion. Even their leaders, why did they not go to
get their load of virgins? They send others, but they don't  go themselves. (they, being leaders of Arabs in heat can just go grab a handful of girls off the street for their harems at whim, eh?). Palestine Islamic Jihad and other Islamic Jihad are just murderers.

Peaceful members of the "Islam" social group need to really examine the evil that they are associating with. Read your Koran, don't take someone else's word for what it says. When you see with your own eyes that it is stupid, then get OUT of that mess!  Is is not merely the fundamental Islamics like Hamas Islamic Jihad that are fueling the fires of hate and murder.

Same advice to the mainstream false-christians like trinitarians, read the Bible for yourself! Then look at the foolish three-god, antichrist garbage that you are involved in. Then get OUT of that mess.

Followers of the Islam both fundamental Islam and social Islam are claiming to be a part of something
peaceful.

Trinitarians are claiming to be "Biblical" and monotheistic. Both are being deceived by wicked men!

You people need to read your book that you claim to believe is "God's Word".  We have Americans attending Mosques trying to be Moslems or Muslims and I really don't think they are aware of the evil they are partaking in.